An introduction to Okkervil River

If you're not familiar with Okkervil River, then I'd highly recommend them. From Texas, they've been around for a decade or so and were introduced to me by a friend who holds their album Black Sheep Boy in particularly high acclaim. Ironically, that's one of my least favourite of their albums. 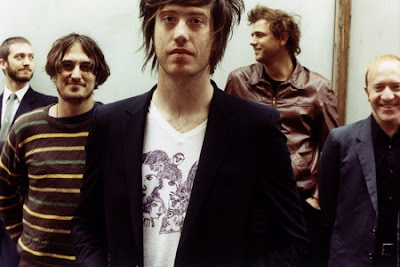 They're firmly in the alt-rock/indie bracket (which you probably could've guessed from the photo, right?), with the likes of Midlake, The Decemberists and The National, and their new album, I Am Very Far, is due in May.

So I mentioned them to another friend who wasn't familiar with them, so I thought it'd be a good excuse to do a little intro CD. And below is the tracklisting for that, including the albums that each song comes from in brackets. Go seek them out - you won't be disappointed.

3. Dead Dog Song (Don't Fall In Love With Everyone You See)

4. Unless It's Kicks (The Stage Names)

5. Calling And Not Calling My Ex (The Stand Ins)

7. April Anne (Golden Opportunities Mixtape)
This is a John Phillips cover (he of Mamas & The Papas fame) and the album was a free collection of live covers the have done

8. John Allyn Smith Sails (The Stage Names)
Check out the nod to The Beach Boys' Sloop John B in this

9. You Can't Hold the Hand of a Rock and Roll Man (Daytrotter Session)
The original of this comes from The Stage Names (my favourite OR record) but I included the live version from the superb Daytrotter session

10. Our Life Is Not A Movie Or Maybe (The Stage Names)

11. Listening to Otis Redding At Home During Christmas (Live) (Golden Opportunities Mixtape)
And this one originally comes from the Don't Fall In Love With Everyone You See album, but again I included the live version from the GO mixtape
Posted by MRW at 10:40